The story of Ajakaja

Since 2005, AjaKaja has been the English language magazine of the Alberta Estonian Heritage Society, published twice yearly in Summer and Winter issues. The focus is on preserving Alberta’s Estonian heritage, family stories, local happenings within the Estonian community and general interest stories from Estonia.

Read more about the history of Ajakaja

AjaKaja has been published in Alberta since 1989. It was produced until 1991 and again from 1998 to 2004 by the Edmonton Estonian Society.

The first issue was produced out of a need to raise awareness of the Estonian community in Alberta. Publication continued with Mare Maxwell as editor until the 1991 declaration of Estonian independence.

In 1998 an expanded version of AjaKaja was published with Anne-Marie Hodes as editor. The new issues had a mix of articles in English and Estonian, and carried news about Alberta Estonians and events in Estonia.

In 2005, publication was transferred to the newly created Alberta Estonian Heritage Society (AEHS) with editorial guidance provided by Eda McClung and Dave Kiil.

The magazine is now published entirely in English, in accordance with AEHS policy.

AjaKaja is one of only a handful of regularly published Estonian society newsletters in Canada. The digital library came about as a result of interest from archivists, museums and libraries in Estonia and the widely scattered Estonian communities similar to AEHS.

The Estonian language title AjaKaja can have various translated meanings: ‘Echo of the Times’ or ‘Call of the Times’.

register to become a member

AEHS also has printed copies available for purchase. AjaKaja publication costs are covered by membership dues, private contributions and grants from organizations such as the Estonian Foundation of Canada and the National Archives of Estonia.

If you are a logged-in user: 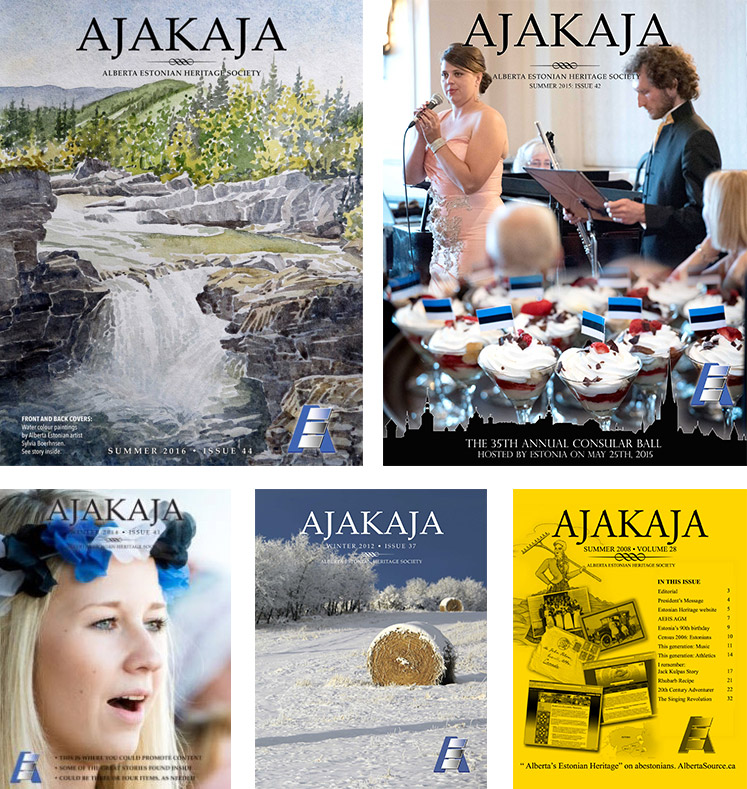